Aspinwall house was a disused warehouse.

The way the Kochin Biennale is organized it looks tailor-made for this event.

The Kochi Muziris Biennale 2018 has a distinct bilingual typeface throughout their signages. I started liking it.

Hope those who can not read Malayalam may also be able to follow the signages.

Meenachil is a 78 km long river which flows through Kottayam district of Kerala. It has spiritual, economic and ecological significance to the locals. However, outsiders may not know much about this river unless we link it with the Aymenem village of ‘God of Small Things’ which is situated on this river, or with Kumarakom, where the river discharges into the Vembanad Lake.

The name Meenachil is derived from Goddess Meenakshi. Several temples, churches, and mosques dot the banks of this river, reflecting the eclectic history of India.

I have put together some images which showcase the landmarks as well as everyday life on the banks of Meenachil.

Please have a look at this album of about 50 images. click here. Be sure to view in fullscreen.

On the images click on ‘i’ for caption and more information.

Vavar was a Muslim who was considered to be a friend and confidante of Lord Ayyappa. This mosque in Erumeli is dedicated to Vavar. Ayyappa devotees on a pilgrimage to Sabarimala, first pay tribute at this mosque before climbing the Sabarimala.

I admit that my knowledge of Art is very limited. However, I had an opportunity to visit the first edition of Kochi Muziris Biennale (KMB) in 2012. Though I was intrigued, amused and baffled by the exhibits, the venue, and the boat ride were more interesting to me as a photographer. See album 2012 .

Six years later, moving into the eighth decade of my life my knowledge of art has not improved much. All the same, I decided to visit KMB 2018 as I happened to be in Kochi on a personal trip. click here to see my album 2018

My expectations were limited and I was only looking for photo opportunities in and around Fort Kochi.

These are some random notes to myself on the visit which I think could be useful for others.

The theme of this edition is ‘Possibilities for a Non-alienated Life’. 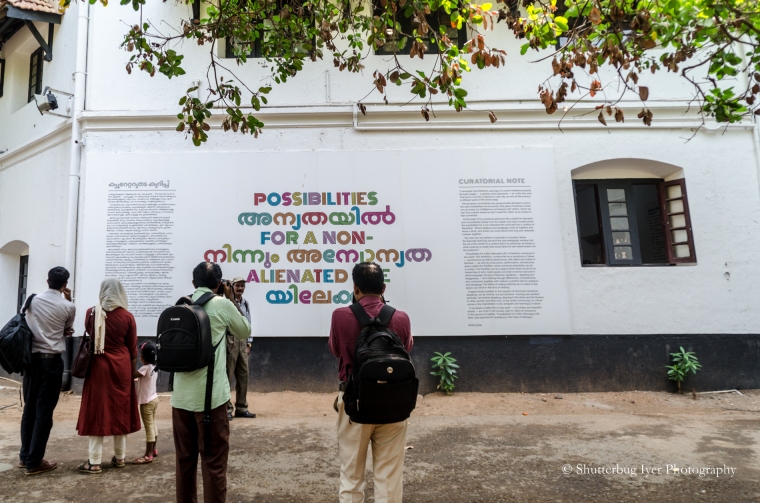 The exhibits are spread over 10 venues mostly in Fort Kochi, with one in the mainland.

Best way to reach the venue is by boat from the Ernakulam Boat Jetty. Boats run by the Kerala state Government ply every 20 to 30 minutes or so. One has to purchase tickets at the counter before boarding.  The fare is princely sum of Rs. 4! No return tickets are issued and an individual can buy only three tickets. For a state like Kerala, they still have separate queues for ladies.

The boat ride takes about 20 minutes with a halt at Embarkation jetty. Try to get a ‘window seat’ for some great views of the port, the cranes, the ships, boats – big and small.

There are at least two exhibition venues (pepper House and Map Project Space) near the jetty but entry tickets are available only at the main venue – Aspinwall House) ,

Individual tickets are priced at Rs 100 for adults per day. Concessional tickets are available for children and groups. There was also a news item that Mondays are made Free Entry for all. I did not verify this.

Being Sunday there was a heavy crowd and I had to stand in the sun for 15 minutes for the tickets. There are no senior citizen counters.

I also purchased a map for Rs.10 I do not know if any guide book was available. It would be handy for a serious art student. But some information on the artists is available on their website.

Guided tours are available at 11 am on all days. I preferred to do it at my own pace.

One should be prepared for long walks and several flights of steps up and down. So it is not really senior citizen friendly.  Access for those with special needs could also be limited. Bubble tops for drinking water showed their welcome presence in many locations.

Buggies are available for senior citizens and I took one from Aspinwall House to Pepper House – a distance of about 500 metres. For other venues, they recommend taking an auto rickshaw at an estimated fare of Rs200 including waiting charges. I also saw some bicycles near the Pepper House. It was a hot day, but the halls were tolerable despite a brief power failure. Due to the paucity of time, I skipped the audiovisual shows, but they could have been useful for resting your tired limbs in cool air-conditioned comfort.

I could cover only Aspinwall House, Pepper House, and Map Project Space in three hours. Serious art lovers will need at least one full day or two do justice to the exhibits. They can also choose from many events, lectures, and workshops.

Some tip for photographers. Lighting can be tricky inside the galleries. In some cases, spot metering can help. A wide angle lens will come in handy in many places.

I can not critically comment on the exhibits, but here is a list of installations where I spent more time.

If time permits, one should not miss the other attractions of Fort Kochi / Mattancherry. The Dutch palace is close by. Photography of the famous murals is not permitted. St.Francis church and the Jew Synagogue are also nearby. The Chinese fishing nets are an all-time favourite but best during sunset. Conducted boat rides from Ernakulam during sunset are also popular. Just walk along the streets can be a rewarding visual treat.

The Muziris Heritage project had announced some attractive tours to Kodungalloor and nearby places (the actual site of the heritage region – about 30 -40 Kms from Kochi). On my telephonic enquiry I got the impression that the amenities and sights were not as depicted in the website. So I skipped that and saved a long drive.

For more images click here to see my album:

The floating bridge at Veli near Trivandrum connects the tourist village with the beach. The Vikram Sarabhai Space Centre is close by.

A tourist boat at the jetty behind Taj Hotel Kochi.Not an additional mode of delivery by amazon.in

Taken from the Aquasserene Resort. The resort is surrounded on three sides by the Paravur backwaters. The Puttingal devi temple where the fire tragedy took place is only about 5 Kms from this place.

We all know that the pass percentage in CA examination is very low. It may be a matter of luck too. Otherwise, why should these CA aspirants from Ernakulam line up in front of an astrologer? (the board in Malayalam reads. ‘Jyotisham, Prasnam, Bhagyaratnam, Jyotisham classes etc’.)

Mr.Ananthakrishnan from Palghat informs that the Marutharode Panchayat adjoining Palghat town has an innovative idea to encourage households to compost their organic waste. The local administration provides free of charge to every household two PVC pipes with a cap at one end. The open end can be embedded in the soil. Composting is initiated by adding a mixture of cow dung, curd, and jaggery with the first charge. Once the first pipe is filled, the second pipe is used. By the time the second one is also full, the composting in the first may be complete. The manure is taken out by simply lifting the pipe.

Recent Posts: Madras Nalla Madras. A photo blog on Madras, that is Chennai

The morning after the inauguration of Chennai Sangamam, the canines are having a Samgamam of their own.

Tuskers Take over the Town

Elephant sculptures put up at Elliott’s Beach, one of the venues of Chennai Sangamam – Namma Oru Thiruvizha is drawing a lot of selfie seekers. The installation seems to be made of cane or some sort of reed. the thiruvizha is to promote Tamil traditional arts and culture.

The Journey of the Coloured Kola Maavu

The kolam with white ‘kola maavu’ is a common and welcome sign in front of most Tamil Nadu homes. Come Marghazhi (Dec-Jan) and Pongal the kolam takes many hues with many coloured powders much like the Rangoli of North India. I have often wondered where the colour powder comes from. My guess was somewhere in […]